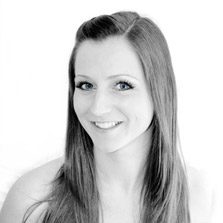 Johanna is a fully qualified professional dance fitness teacher, specialising in both adults’ and children’s classes throughout Devon.

Her interest in dance started from the early age of three and quickly developed into a life-long passion. She has now been dancing for 35 years.

In 1981, together with her family, Johanna moved from Exeter to Sidmouth where at the age of three she joined Sidmouth Ballet School. Here Johanna continued to train in a variety of styles of dance and fitness throughout her childhood and was fortunate enough to gain numerous exams in RAD* Ballet and ISTD* Tap, Modern and Jazz Dance.

After completing three ‘A’ Levels at Exeter College and obtaining an ‘A’ grade in Dance, she successfully auditioned to train professionally at Performers College, Essex, under the direction of Brian Rogers. Brian is one of this country’s leading commercial-stage and television Choreographers and Directors. At Performers College, Johanna continued her professional training with a three-year broad-based course consisting of practical dance, (RAD and ISTD Ballet, Repertoire, ISTD Modern, Stylised Jazz, Tap, Contemporary, Pas de Deux), and musical theatre. She gained two ISTD Teachers’ Associate exams in both Tap and Modern Dance, a Diploma in Musical Theatre and Performing Arts and many other dance exams. In addition, Johanna gained valuable experience in numerous areas of professional work, including the theatre, film and television.

Since graduating as a professional teacher and performer, her credits include international dance shows touring the USA, Canada, Asia and Europe. She has also performed on the MSC Orchestra, Princess and Silja Line cruise ships, worked for the BBC, performed in London’s West End and appeared alongside stars, including Rachel Stevens and Sacha Baron Cohen.

In 2011, Johanna decided to return to her home town of Sidmouth. The move has enabled her to spend more time with close friends and family and to live in a part of the country which she loves. Since moving to Devon, Johanna has also become a fully qualified Zumba, Zumba Gold, Zumba Kids, Bokwa Fitness and Fitsteps instructor, and gained a Level 4 Associate Diploma in Performing Arts with Urban Strides, making her one of a handful of accredited Street Dance teachers in the UK.

“All I have ever known and truly loved is dance and to be a dancer you need to be fit. However, just like most people, I do not enjoy all the physical workouts! Dance and aerobics is a perfect combination of everything I love to do. It combines both dance and fitness giving me a sense of improved health and wellbeing, both physically and emotionally. In addition, it lightens my mood and leaves me feeling refreshed and energised. This has since inspired me to offer the community within East Devon my own classes, providing both adults and children with the opportunity to benefit from the same positive experience. I very much hope that JM Dance Fit will help inspire people to experience and sustain an improved state of physical and mental health, leading to a more enjoyable and rewarding lifestyle.”

View All
View All
Tweets by @JM_DanceFit